Killing just ain’t right – But neither is child abuse! That’s why this twelve-year-old girl
takes matters into her own hands and when she does, it's murder!
AMAZON CATEGORIES 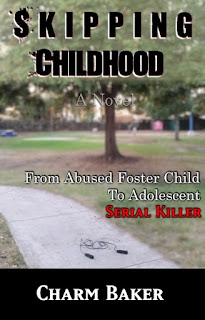 The dark seed that began to grow inside Deandra Anne Baxter was planted by the man named Ben Coleman.

Skipping Childhood’s juvenile killer is reminiscent of Rhoda Penmark (The Bad Seed), but unlike little Rhoda; Deandra Baxter has good reason to kill!

By age twelve, she had already seen and heard more than any child her age should have ever been exposed to.

This is a contemporary African American novel; a dark drama of a sexual abuse victim who resorts to serial killing.  Readers who enjoy books about revenge killing  won’t be disappointed.  This gritty urban coming of age story sheds a different light on murder and dares to address the topic of children who kill, especially for good reason.  This is not just a disturbing tale about retribution murder; it is an empowering story of abuse and survival.

BOOK EXCERPT:
Deandra’s first instinct was to throw a rock down the ravine and try to hit him in the head.  Now that she had already tried to kill him, she had to make sure that she actually finished the job.  But she also had to be smart.  She couldn’t afford to do anything that might make it look like this wasn’t an accident.  When she shined the flashlight down where he was, she could see his twisted and contorted body.  His mouth was filling with blood from the internal injuries.  Deandra could detect a faint gurgling sound.  It was obvious that he was close to death, even though there was still the slightest movement.  She decided to do nothing.  Instead, she waited in the dark for close to an hour, making certain that the movement and gurgling had stopped.

Being convinced that he was dead; she got up and started making her way back to the campsite…


This book is currently scheduled for a December 1, 2017 release, but the pre-release can be purchased now on AMAZON, and Smashwords  online distributors.  Be sure to look for the print version - available in January 2017.

Want to Lend Your SUPPORT to the

Success of this book?

ATTENTION LIBRARY PATRONS:
If anyone in the Southern California area is near one of these Public Library locations, you can make a request to them to purchase a copy of “Skipping Childhood” for your nearest branch.  The print book will be released in January 2017, plenty enough time for them to order a few copies.  Some libraries also make digital downloads available, but if you use the following information, the ISBN is specifically for a print format.  All the information to make a library request for “Skipping Childhood” is below.

Click this link:  Public Library
Scroll all the way to the bottom of the page and look on the right side of page for the “Contact” link.  Follow the contact link to the “Suggest a Purchase” link and simply insert the following details under the section that says:

Fill in these Suggested Item Details:

If you live in another state and would like to do the same for this book, please check for a link to your local branches.  Thank you.